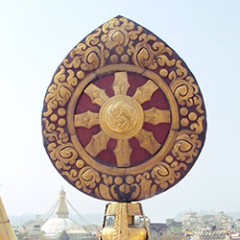 For many years, Chokyi Nyima Rinpoche tirelessly travelled to the West expounding the Dharma to a new audience anxiously awaiting these teachings. He graciously disclosed the most secret and profound instructions without holding anything back, which was a characteristic trait of his lineage. He deeply inspired his students who were touched personally by his heart-to-heart transmission. Most important, they sought to incorporate these teachings and make them part of their daily lives.

He soon realized that his students faced challenges unique to the busy lifestyle of the West. For some, as time passed and the pressures and stress of daily life resumed after the retreats, their inspiration began to fade. He knew that something had to be done. A number of students suggested the benefits of a flexible, online program that could support them in their daily lives, and assist them in implementing the Dharma. The seed of the TTE program was planted.

In 2010, Lama Tenzin Sangpo showed a Chokgyur Lingpa terma of Tara’s Profound Essence to the translator Heidi Koeppl. Lama Tenzin Sangpo was very much taken by the pithy and practical instructions of this terma that had originated from Tara herself. Heidi was also thrilled by it and showed it to Chokyi Nyima Rinpoche. Chokyi Nyima Rinpoche himself marveled about this terma. In fact, so much so, that he decided that this would be an excellent basis upon which to build a gradual online program, and he granted the required empowerments.

Thereafter, under the broad supervision of Chokyi Nyima Rinpoche and close guidance of Lama Tenzin Sangpo, Heidi began to develop daily online contemplations based on this terma. Soon thereafter, Michael Eisenbach joined her efforts, assuming the difficult task of developing the technical part of the program. Isobel Jones became the narrator of the daily contemplations. She gave Tara a beautiful, calming yet authoritative “Oxford English” voice, as Rinpoche liked to call it. At this time, the Dharmachakra Practices team (now called the Tara Triple Excellence Team) was established. In this early stage of the program, Kathleen Morris and Ani Tsondru provided the team with priceless support.

In January 2011, the first part of the Tara’s Triple Excellence program was launched. Two months later, Nika Jovic joined the core development team as the program coordinator to support the production of the online terma and Michael Friedman offered help as editor of the contemplations. Soon after the launch, participants from all over the world sought to translate the program into their native languages. Nika coordinated the translation teams for two years until Tatiana Tagle, the initial coordinator of the Spanish team, joined the core team to coordinate the herculean effort of translating Tara’s Triple Excellence into different languages.

In November 2011, the first “Tara retreat” in Pharping, a town south of Kathmandu in Nepal, was organized by the Dharmachakra Practices team. This retreat has since become an annual event occurring before Chokyi Nyima Rinpoche’s Annual November Seminar.

The team grew steadily over the years. Sally Warren took responsibility for keeping the moderated forum active. When production of the Second Excellence Part II started, she became the editor of the daily contemplations. Soon thereafter, Michael Eisenbach received much needed additional technical support with Harald Hansen and Tatiana Tagle joining the team. In Fall 2015, Jenia Morozova joined the team as the main graphic designer.

In April 2016, the Dharma Ratna Shop was founded under the supervision of Dharmachakra Practices to provide TTE participants with authentic ritual and shrine items. Nata Kryvolapchuk joined the team as shop manager.

In Fall 2016, the team solicited Greg Whiteside for assistance with strategic planning and team management. Michael Eisenbach and Heidi Koeppl took on the responsibility of directors of DharmaSun and the Tara’s Triple Excellence online meditation program, respectively. The “Management Team” consisted of Heidi Koeppl as editor-in-chief, Nika Jovic as head of development, and Tatiana Tagle as head of finance and human resources.

The name Dharmachakra Practices was changed to Tara’s Triple Excellence team. Sacha Mullins generously offered her skills as the new Tara voice. By the end of 2017, Sally Warren took on the task of the TTE “participants outreach,” and Jack Freudenheim assisted with technical support. Andrea Glapa coordinated the different language teams. Nika Jovic continues to coordinate the English production, and with Jenia Morozova, manages the TTE marketing and communications. Laura Schultz Hansen joined the team and launched the first fundraising campaign, “Make a gift of these priceless teachings.” Also, Monica Thunder started work on a beginner’s program under the supervision and guidance of the TTE team. Liz Miller continues to support the TTE team’s various projects with her excellent editing skills.

In January 2018, to support TTE participants and help them connect more actively around the world, the first weekly TTE Monthly Discussion Group was formed with George Woodard and Liz Miller as facilitators. A few months thereafter, the TTE participants outreach organized the first Monthly Discussion Group and Q&A sessions with Lama Tenzin and Chokyi Nyima Rinpoche. Julie Kaye, our newest team member, has graciously offered her skills with content development and marketing.

The Tara’s Triple Excellence program has expanded to about 70 volunteers who diligently work on translating, editing, narrating, and video editing the TTE program into their respective languages and supporting the various projects of the English team, such as transcribing the teachings and seminars of Chokyi Nyima Rinpoche and Lama Tenzin Sangpo.