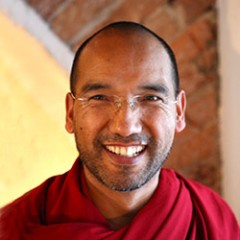 Lama Tenzin Sangpo received ordination and a traditional monastic education at Ka-Nying Shedrub Ling, Chokyi Nyima Rinpoche’s monastery, in Boudhanath, Nepal at an early age. He successfully completed a traditional three-year retreat and served for many years as the recitation master of the monastery’s extensive Buddhist ritual practices. He is one of the most knowledgeable and respected lamas at Ka-Nying Shedrub Ling.

Lama Tenzin Sangpo is thoroughly versed in the various Buddhist philosophical systems and is a highly skilled meditation practitioner. Presently, Lama Tenzin Sangpo serves as the resident Lama of Gomde Germany-Austria and travels to teach at many Gomde centers around the world.