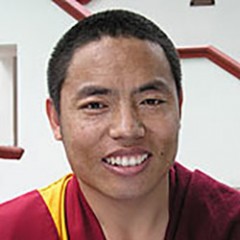 Khenpo Jampa Donden was born in Lhoka, in Central Tibet. He was ordained as a monk at the age of 14 at the Sakya Monastery, Gongar Chöde. At 18-years-old he left Tibet and traveled to India in pursuit of further study. Khenpo Jampa enrolled at Dzongsar Khyentse Rinpoche’s monastic college in Bir, where he studied for 10 years, and was regarded by his fellow students as a bright mind and a kind spirit. After completing his studies, Khenpo Jampa taught at Dzongsar Shedra and was awarded his Khenpo degree.

In 2000 Khenpo Jampa was invited to Ka-Nying Shedrub Ling Monastery in Kathmandu where he began teaching philosophy in the monastic Shedra as well as in the Center for Buddhist Studies (CBS). Khenpo Jampa is admired for his open-minded and accessible presentations of the core texts of the traditional Shedra curriculum, as well as for his engaging teaching style.