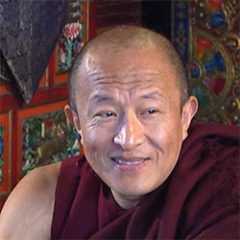 Dzongsar Jamyang Khyentse Rinpoche was born in far Eastern, Bhutan in 1961. At the age of seven he was recognized, by H.H. Sakya Trizin Rinpoche, as the third incarnation of the founder of Khyentse lineage of Tibetan Buddhism. From a young age he has been active in the preservation of the Buddhist teaching, establishing centres of learning, supporting practitioners, publishing books and teaching all over the world. Dzongsar Khyentse Rinpoche supervises his traditional seat of Dzongsar Monastery and its retreat centers in Eastern Tibet, as well as his new colleges in India and Bhutan. He has also established centres in many countries.

Among many other organisations, in 2001 Khyentse Foundation was founded by Dzongsar Khyentse Rinpoche. It is a non-profit organization with the stated goal “to act as a system of patronage for institutions and individuals engaged in the practice and study of Buddha’s wisdom and compassion.”

(parts of this text were taken from: wikipedia)