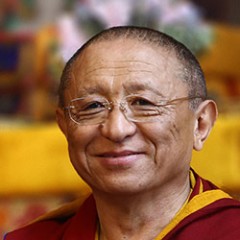 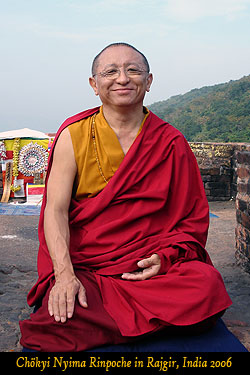 In the 7th lunar month of 1951, Tulku Chokyi Nyima Rinpoche was born into the Tsangsar family as the first-born son of Tulku Urgyen Rinpoche.

At 18 months of age, Chokyi Nyima — Sun of the Dharma — was recognized as the 7th incarnation of the Drikung Kagyu lama, Gar Drubchen, a Tibetan mahasiddha and spiritual emanation of the renowned 2nd century Indian Buddhist philosopher, Nagarjuna. Soon after his recognition, he was enthroned at his predecessor’s monastery, Drong Gon Tubten Dargye Ling, in Nakchukha, Central Tibet.

In 1959, Chokyi Nyima Rinpoche and his younger brother, Tsikey Chokling Rinpoche, enrolled at the Young Lamas’ School in Dalhousie, India. At the age of 13, Rinpoche entered Rumtek, the renowned seat of the Kagyu School of Tibetan Buddhism, where he spent 11 years studying the Karma Kagyu, Drikung Kagyu, and Nyingma traditions under the guidance of such eminent masters as His Holiness the 16th Gyalwang Karmapa, Kyabje Dilgo Khyentse Rinpoche, and Kyabje Tulku Urgyen Rinpoche. 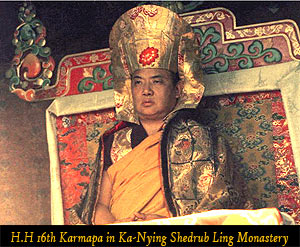 In 1974, Chokyi Nyima Rinpoche left Rumtek, where he had been the personal aide to Rangjung Rigpey Dorje, the 16th Karmapa, and joined his father, mother and younger brother in Boudhanath, a suburb of Kathmandu. At the command of the 16th Karmapa, the family established Ka-Nying Shedrub Ling Monastery just north of the Great Jarung Khashor Stupa in Boudhanath. In 1976, H.H. the Karmapa instructed the then 25-year-old Rinpoche to become the monastery’s abbot. His Holiness also advised Rinpoche to turn his efforts towards instructing Western practitioners. To fulfill this directive, Rinpoche honed his English language skills and began to offer weekend teachings to the flourishing Western community in Nepal as well as to interested travelers. This ongoing series of free public talks, which came to be known as the “Saturday Talks,” continue to this day. 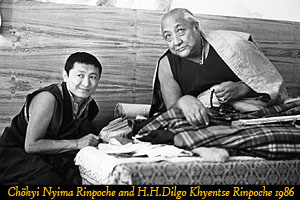 Rinpoche also created Rangjung Yeshe Publications with the intention to disseminate high quality translations of authentic Buddhist literature. Erik Pema Kunsang is the primary translator of most of the publications.

Rinpoche possesses a good command of the English language, and has instructed an ever-growing number of Western students in meditation practice since 1977.  Moreover, each autumn Rinpoche conducts a 10-day Fall Seminar on Buddhist teachings – his topics range from the most foundational to the most esoteric.

Many of Rinpoche’s Tibetan Buddhist Dharma Centres, or “Gomdes,” currently offer teaching and meditation retreat to students in America, Austria, Denmark, France, Malaysia, Russia, Scotland, Ukraine and the United Kingdom. Smaller study groups have also formed under his direction in many other countries. 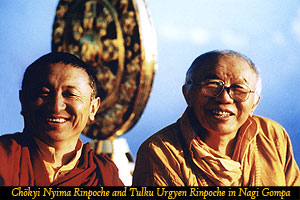 For over 40 years, Chokyi Nyima Rinpoche has overseen the welfare and spiritual education of almost 500 monks and nuns who primarily reside at Ka-Nying Shedrub Ling Monastery, Asura Cave Retreat Centre and Nagi Gompa Hermitage. His heartfelt wish is to double this number of ordained practitioners. In expectation of this growth, his monasteries and retreat centers are consistently undergoing improvements and expansion.

In the meantime, much of Rinpoche’s everyday life is devoted to the spiritual needs of the local congregation of both Tibetan and Nepalese lay practitioners. As an adjunct to his activity locally, and for the betterment of the monastery’s surrounding community, Rinpoche founded the charitable organization Shenpen. Shenpen addresses the practical needs of the disadvantaged, such as healthcare and education, as well as intense earthquake relief and is administered by a number of Rinpoche’s close Western students.